We say this every year but the summer has flown by and we are gearing up for back to school! To celebrate this exciting time of year, The Little Style File, BonBon Rose Girls and Baby Shopaholic are hosting a fun Twitter Party sponsored by SoCozy. We’ll be celebrating SoCozy’s partnership with STATE Bags along with giving tips for getting ready for back to school, ideas on back to school hair styles, how to keep the lice away (it’s yucky but need to know info!) and great prizes!

SoCozy has partnered with STATE Bag this summer to create a smart backpack with great style for a great cause. For each SoCozy STATE Bag backpack purchased on SoCozy.com they hand deliver one backpack filled with school supplies to a child in need, giving a kid the essential tools for success. How great is that?!

This eye catching bag features a main storage compartment with supply organizers, key clip and iPad pocket, a zippered front pocket, and Velcro side pockets. If you aren’t one of our lucky winners on July 23rd, you can purchase your bag from SoCozy.com.

SoCozy hair care products are great for kids ages 3-12. They don’t contain any yucky ingredients and work so well for cleaning and styling kid hair.  In case you missed it, click HERE to check out how it worked on Peyton’s hair. 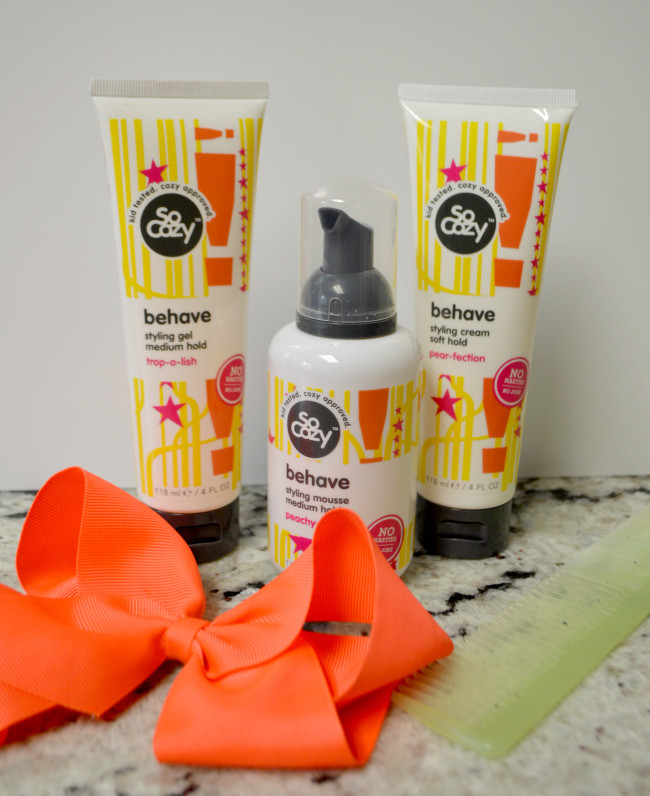 Below are the official rules for the Twitter Party.  We’ll see you on Thursday!

No purchase or mobile use necessary to participate or win. By entering, entrants agree to be bound by these Official Rules and by the decisions of the sponsor, and The Little Style File, BonBon Rose Girls and Baby Shopaholic.

The Promotion does not require an RSVP.

Prize Package selection is at the sole selection and discretion of Sponsor and its representatives and can be changed or modified at any time without notice. No exchanges, substitutions or cash value shall be awarded in lieu of any of the above packages. All decisions on award of any packages are final and cannot be challenged.

Potential winners will be asked to confirm receipt of their prize to The Little Style File via a form sent to the winner during the party. Failure to complete the form within the Party Timeline will result in disqualification and a new winner will be drawn.

Eligibility. Must be a resident of the fifty United States or D.C., 18 or older to participate. Void where prohibited by law. Employees, officers, and directors of the sponsor and their respective parent companies, affiliates, subsidiaries, distributors, sales representatives, suppliers, advertising and promotional agencies, and the immediate family members (spouse, children, parents, siblings) or household members (whether or not related) of each are not eligible. By participating and/or accepting any prize, winners release and agree to hold harmless Sponsor, Presenter, and each of their respective affiliates, directors, employees, officers and agents, including without limitation, their advertising/promotion agencies from any and all liability, injury, loss, or damage of any kind to property or person(s), including death, arising in whole or in part, directly or indirectly, from or in connection with participation in the Sweepstakes, or the awarding, receipt, possession, use or misuse of any prize and/or with respect to participation in any prize related activity. Only one prize

WINNER NOTIFICATION: Sponsor’s decisions are final and binding on all matters relating to this Promotion. The Sponsor and/or Presenter will monitor tweets using the hashtag #BTSinStyle on Twitter and notify the potential winner via direct message. Potential winners may be required to execute and return an affidavit of eligibility, a liability release and, where lawful, a publicity release within 30 days of date of issuance. If such documents are not returned within the specified time period, Sponsor is unable to contact a potential winner within a reasonable time period, prize or prize notification is returned as undeliverable, or a potential winner is not in compliance with these Official Rules, prize will be forfeited and, at Sponsor’s discretion, an alternate winner will be drawn.

GENERAL PRIZE CONDITIONS: All prize details are at the sole discretion of the Sponsor. All prizes are awarded “as is” with no warranty or guarantee, either express or implied. No substitution, transfer, or cash equivalent of prize is permitted, except by Sponsor, which reserves the right to substitute a prize (or portion thereof) with one of comparable or greater value, at its sole discretion. Any and all federal, state and local taxes on the prizes, and any other costs, fees, and expenses not explicitly stated herein as being awarded, are the sole responsibility of the

GENERAL CONDITIONS: By participating, each entrant agrees: (a) to abide by these Official Rules and decisions of Sponsor and Presenter, which shall be final in all respects relating to this Promotion; (b) to release, discharge and hold harmless Sponsor, Presenter, and Twitter, and their respective parents, affiliates, subsidiaries, and advertising and promotion agencies, and the respective officers, directors, shareholders, employees, agents and representatives of the forgoing (collectively, “Released Parties”) from any and all injuries, liability, losses and damages of any kind to persons, including death, or property resulting, in whole or in part, directly or indirectly, from entrant’s participation in the Promotion or the acceptance, possession, use or misuse of any awarded prize; and (c) to the use of his/her name, voice, performance, photograph/video, image and/or likeness for programming, advertising, publicity and promotional purposes in any and all media, now or hereafter known, worldwide and on the Internet, and in perpetuity by Sponsor and its designees, without compensation (unless prohibited by law) or additional consents from entrant or any third party and without prior notice, approval or inspection, and to execute specific consent to such use if asked to do so. In the event of a dispute regarding entries and/or tweets received from multiple users having the same Twitter account, the authorized subscriber of the Twitter account at the time of entry will be deemed to be the entrant and must comply with these Official Rules. Authorized account subscriber is the natural person who is assigned the Twitter account by Twitter. Released Parties not responsible for misdirected or undeliverable Twitter updates (“tweets”) or for any technical problems, malfunctions of any telephone lines, computer systems, servers, providers, hardware/software, lost or unavailable network connections or failed, incomplete, garbled or delayed computer transmission or any combination thereof. Released Parties are not responsible for late, lost, damaged, misdirected, incomplete, undeliverable, destroyed, garbled or stolen entries or tweets; or for lost, interrupted or unavailable network, server, Internet Service Provider (ISP), website, or other connections, availability or accessibility or miscommunications or failed computer, satellite, telephone or cable transmissions, lines, or technical failure or jumbled, scrambled, delayed, or misdirected transmissions or computer hardware or software malfunctions, failures or difficulties, or other errors or difficulties of any kind whether typographical, human mechanical, electronic, computer, network, printing or otherwise relating to or in connection with the Promotion, including, without limitation, errors or difficulties which may occur in connection with the administration of the Promotion, the posting of questions, the processing of entries and/or tweets, the announcement of the prize or in any Promotion-related materials. Released Parties are also not responsible for any incorrect or inaccurate information, whether caused by site users, tampering, hacking, or by any equipment or programming associated with or utilized in the Promotion. Released Parties are not responsible for injury or damage to participants’ or to any other person’s computer related to or resulting from participating in this Promotion or downloading materials from or use of the website. Sponsor may disqualify anyone from participating in the Promotion or winning a prize (and void all associated entries/tweets) if, in its sole discretion, it determines that such person is attempting to undermine the legitimate operation of the Promotion by cheating, deception or other unfair playing practices, or intending to annoy, abuse, threaten or harass any other entrant or Sponsor’s representatives.

ANY ATTEMPT TO DELIBERATELY DAMAGE THE WEBSITE OR UNDERMINE THE LEGITIMATE OPERATION OF THE PROMOTION MAY BE IN VIOLATION OF CRIMINAL AND CIVIL LAWS AND SHOULD SUCH AN ATTEMPT BE MADE, SPONSOR RESERVES THE RIGHT TO SEEK DAMAGES AND OTHER REMEDIES (INCLUDING ATTORNEYS’ FEES) FROM ANY SUCH INDIVIDUAL TO THE FULLEST EXTENT OF THE LAW, INCLUDING CRIMINAL PROSECUTION.

Sponsor reserves the right in its sole discretion to cancel or suspend any portion of the Promotion for any reason, including should any cause corrupt the administration, security or proper play of the Promotion and, in the event of termination, to determine the winner(s) for the question(s) at issue from among all eligible tweets and/or entries received up to such time for the applicable question(s) using the winner determination procedure outlined above.

USE OF INFORMATION: The information that you provide in connection with the Twitter Party may be used by Sponsor in accordance with its Privacy Policy and which may be updated from time to time without notice.

SPECIAL NOTE: Twitter and Target are not sponsors of this promotion.